Looking for Canal Ancestors?
A recent request set me off to look for ‘Canal Ancestors’ and something I know very little about other than they are pretty water ways and big part of out industrial and early logistics.
This is a very interesting website that is called Spellweaver and can be found here: www.spellweaver-online.co.uk
This says ‘are you looking for your boat ancestors and if so good place to begin?’
I rang and spoke to Angela and she explained to me how the name of the website came about and the website its self due to her own interest. I suggested that she might have liked to join us on the 3rd of June but was unable to this year, but hopefully next year as she would be more prepared. This is what she says on the home page: Do you have canal boat ancestors? If so you have probably already discovered the difficulties in tracing them! Well. I’m no expert, but I do have canal ancestors, and I hope that some of the lessons I’ve learned in trying to trace them might be useful to other people. She then explains. The website is only 3 years old and so very much a work in progress.
I would highly recommend a visit if you are looking for these ancestor or not, very interesting. She also says: One thing you can be sure of.
The search for your ancestors will never be boring, and you will learn a great deal about a great many things. And you may well be surprised at your admiration for your ancestors and their way of life.

The History of the Canal Network
The canal network started to appear in the 18th century, in the days before the railways the canals were used to carry goods, people and documents around the country. The network continued to expand and linked the major industrial areas of the country together.
As the forerunner to the railways and motorways of recent times, the canals provided employment for many people, the men who built the canals (called navvies, as the canals were referred to as navigations) would often find employment on the canal when construction was complete. Whole families would live and work on canal boats and raise several generations whilst living afloat. Many children were born on the boats so don’t be surprised to see a boat name on a birth certificate.
By the 1850’s the railways started to take more and more business from the canal companies, the ability to move goods and people far more quickly allowed the railways to expand at the expense of the canal owners. The situation continued until in the 1940’s water carrying became nationalised, British Waterways took responsibility for operating boats and set about changing the appearance of boats forever. Gone were the highly decorated boats of yesteryear to be replaced by the blue and yellow livery of BW. The 1970’s saw what was in effect the end of canal transport, the canals (now in need of major investment) could not compete with road and rail competitors and commercial water transport had all but stopped.
From Family Tree Forum https://www.familytreeforum.com/content.php/325-Canals-and-Waterways

Networking
Do you belong to another History or Heritage society?
Please encourage them to join us on the 3rd of June.
Booking forms can be downloaded from our website or by emailing
events_coordinator@cadfhs.org

Researching Your Own Theatrical Ancestors
We had an unusual request recently and not some thing I had thought of and I don’t have any of them in my family either. So I thought I would see what I could find.

Hint and tips to find them can be found here:
www.arthurlloyd.co.uk/AncestorResearch.htm

Theatre – Chesterfield Library Archives:
A small theatrical collection includes records of the former Chesterfield Civic Theatre. It includes a comprehensive collection of press cuttings, programmes and photographs dating from its opening in 1949. There is also a small collection of items relating to the Chesterfield Corporation Theatre. There are examples of theatrical printing work by George Allen of Brimington including posters of the 1930s and 1940s era, and programmes of the Hippodrome Theatre.
Chesterfield Library Blog – Articles specific to the ‘Theatre’
https://recordoffice.wordpress.com/tag/theatre/
Book
Who’s Who in the Theatre – 1922: Do You Have Any Theatrical Ancestors? If So They May Appear in This Directory.: Biographies of Actors, Actresses and … Writers and Workers for the Stage 1914-1918
Click here to view on Amazon

Want to read more? This extract was taken from: ISOGG
click link for more on this subject.
International Society of Genetic Genealogy Wiki

What is a First Cousin, Twice Removed?
First cousins are the people in your family who have two of the same grandparents as you.

December 2016
Identify ancestors before buying a certificate!
The General Register Office (GRO) for England and Wales has released new online indexes that boost family historians’ chances of accurately identifying their ancestors, before forking out for a certificate. For the first time there is a search field for the mother’s maiden name for locating a birth registered between July 1837 and December 1915, and an age at death field for deaths registered between July 1837 and December 1957.

Meetings are held on the first Tuesday of the month at St Hughs Catholic Church, Littlemoor, Newbold. S41 8QP 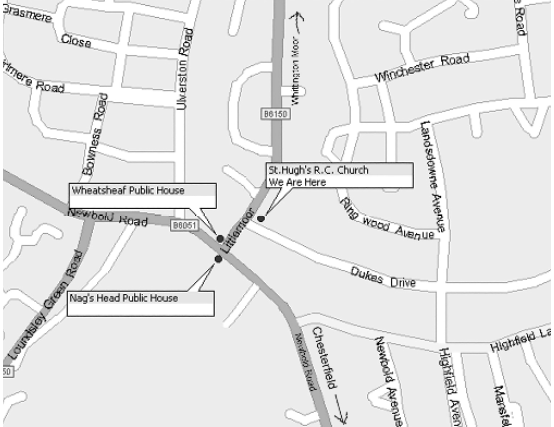 Providing a strong base to enable our members to develop and grow as ‘Family History’ researchers.

We aim to foster a positive experience and environment, through creative and innovative, and related services for our members.

Find out what this means for you and your data by reading our Privacy Policy We also use Cookies to improve your user experience on this site.

You can find out more and manage your Cookies using the tabs on the left. We've also updated our Privacy Policies.

Google Analytics Cookies are used to identify unique users and allow us to see where users come from and which pages they visit. They do not personally identify you. If you disable these cookies, you will not be recognised when you return. The site will treat you as a new visitor.

These are necessary cookies, they are used to remember your preferences for the site, including your logged in status, language preferences etc. These cookies do not store any visitor information. We highly recommend you do not turn them off as it will cause the website to not function properly.

These cookies are not necessary for the basic functioning of this site, however de-activating them may impede your user experience.

The GDPR is designed to help all of us have more control over our personal data, and how is it used.

Who does the information GDPR apply to?

Data subjects, being all visitors and users of any website who are members of the European Union, and therefore who submit personal data. Chesterfield & District Family History Society is the data processor and data controller of this site. You can find out more about this law here

This Privacy Policy sets out how we use and protect information that you may provide when you use this website.  Your privacy is protected and important to us. If you provide identifiable personal information it will only be used to help us fulfil your project requirements.

CADFHS is the Society who collects any personal data submitted through cadfhs.org.

We may update this policy periodically, please check this page to ensure that you are in agreement with any changes.

Personal information, basically any data that can be used to identify or contact you is collected so we can service your requirements.  This could include your name, address details, email, telephone numbers, or information pertaining to your family history projects. You may also at times be asked to leave a message about your enquiry or contribution.  Websites also collect your IP address through the use of Cookies (find out more about cookies below).

If you opted-in to our mailing list, you may receive occasional emails on important updates or service information. You have the right to opt-out or and have any personal details removed at any time, please email Dena Fanshaw: secretary@cadfhs.org

What We Do With The Information We Collect

Information is saved until the enquiry is dealt with, and then archived with the project or on cloud based systems during your membership period.  We also retain your contact details and information in the emails you have sent, but you can request to have your personal details deleted at any time.

We are committed to ensuring that your information is secure. In order to prevent unauthorised access or disclosure, we have put in place suitable physical, electronic and managerial procedures to safeguard and secure the information we collect online.

You may choose to restrict the collection or use of your personal information in the following ways:

User-level and event-level data associated with Google Analytics cookies is retained for 14 months and then automatically deleted.

We have implemented IP Anonymization, simply put, the last three digits of your IP address are set to zeros in memory shortly after being sent to the Analytics Collection Network. The full IP address is never written retained, or written to disk.

This site also uses cookies to improve your user experience, find out more or manage them here.